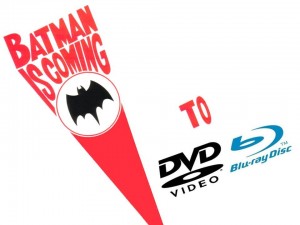 Not long after Warner Brothers released an official confirmation. It has taken me a couple days to post this on my website because naturally I could not believe it. Sometime this year we can all finally own copies of our beloved TV series.

So why has it taken so long? Well there are many conflicting reasons, most of which revolve around copyright complications. Rumours surrounding disagreements between DC Comics who of corse own the rights to Batman, Warner Brothers who own the license to Batman merchandise and 20th Century Fox who own the rights to the 1960s series. Furthurmore the Dozier estate who own Greenway Productions (produced the 1960s series) sued 20th Century Fox over unpaid monies which was not paid back, the case was later dismissed. Also problems about un-credited cameo roles such as the bat-climb roles and copyright for the soundtrack/underscore music used for the show. During the 1960’s they never could imagine home releases for the series so unfortunately no legislation was put into place to allow it in the future.

Some fans including myself had the opinion Warner Brothers did not want to release the series so it does not conflict with there new “Dark Knight” approach to Batman. I am happy Warner Brothers have finally budged but I am not giving them any praise as they have been sitting on this for years.

From what I can gather so far all seasons will be released onto both DVD and Blu-Ray. The release date is unkown but have been told it will be this year (2014). I hope and pray they give us some exciting bonus features along with the DVD but hey the fact its being released we can all be thankful for.

As soon as a release date is released along with artwork for the DVD cases I will post here straight away, along with pre-release information. So stay tuned batfans!