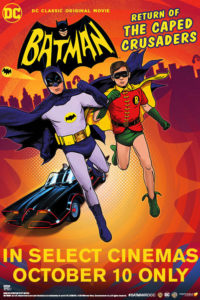 Adam West, Burt Ward and Julie Newmar are back playing there respective 1960s Batman characters Batman, Robin and Catwoman. To be released this month in selected cinemas worldwide a new Batman animated movie with the same tone as the classic TV series will hit our cinema screens tomorrow Tuesday 11th October 2016. With a BluRay and DVD release to follow.

According to IMDB.COM the storyline is as follows; “Batman and Robin spring into action when Gotham City is threatened by Penguin, The Joker, Riddler and Catwoman. This time, the four super villains have combined their wicked talents to hatch a plot so nefarious that the Dynamic Duo really have their hands full.”