For the 80th anniversary of Selina Kyle alias Catwoman in comics, DC have released a hundred page special edition in the characters honour.

As this is a 66 Batman website, the one I would assume will interest visitors here is the story by Jeff Parker. If you don’t know already, Jeff Parker was one of the creators behind the 66′ Batman comic book stories, which ran in publication between 2013 and 2016. The story included in this publication is centred around Julie Newmar’s era of being Catwoman.

Around the release of the series onto home video in 2014, we had an array of ’66 merchandise under the name of either ’66 Batman or Classic Batman. Picture below is the ’66 Omnibus, which I had purchased only a week or so ago and this is includes all 30 publications. 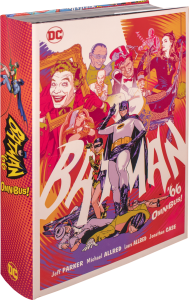 The comics are new stories written and drawn in the style of the Batman television series – it also introduces new characters such as Poison Ivy into the ’66 world. I know i’m slow to the game on this, but once I have completed reading through all the stories, I will post a review of my opinions. So far, i’m very impressed – its the closest any of us Bat-Fans will get to ‘new episodes’ of the 66 Batman series.

Now back to ‘The Catwoman of Earth’.

It’s a short story around eight pages long. Batman is away so Catwoman decides to take advantage and pull of a heist at the ‘Gotham Science Fair’. A Professor at the fair alerts the audience that an UFO is coming, aliens from the planet Oobysku. A female alien from the planet, takes an admiration to Catwoman’s appearance – particularly her costumes and wonders if the humans of Earth could replicate one for her. Catwoman however, has no patients to entertain the aliens and declares that she is going to defend the planet Earth.

The male aliens are amazed that a woman has stood up and taken charge of the situation, without asking the male humans. (Touching on a bit of women’s rights issues here). Catwoman is able to overcome the male aliens and was offered the thing she was about to steal from the fair – as this was too easy with no challenge and the eminent feeling of she will get arrested – Catwoman and a female alien leave Earth inside the UFO.