Alfred Pennyworth (interestingly, this surname was never used for the 60s series). Alfred is the most important/pivotable character in the series outside of the dynamic duo (later trio). As the butler in Wayne Manor he knows the identities of both Batman & Robin then later becomes a confident of Batgirl in the third season, establishing her secret identity – crucially was the undercover link between Batgirl & the dynamic duo during the third season as they had no direct contact between them. He typically at the start of a new story or episode would answer the Batphone and quickly come up with a clever way of getting Bruce and Dick to head to the Batcave without Aunt Harriet suspecting a thing!

“A matter of grave importance has arisen sir, your attention would be appreciated, a contract to be ahem… red”.

As mentioned Alfred’s particular importance in the third season, he would also become entangled within the storylines during the first two seasons also. He first posed as as a legal solicitor in the episode ‘The Penguin Goes Straight’ as well as other notable guises; his own cousin Egbert in ‘The Joker’s Provoker’s’, Batman’s lawyer when wrongfully arrested in ‘Catwoman Goes To College’, Batman’s boxing coach in ‘Ring Around the Riddler’, the book collector Mr A.L Fred in ‘A Sport of Penguins’, Gotham’s oldest hippie who helps Batgirl escape a trap in ‘Catwoman’s Dressed to Kill’ and Lord Easy Street – one of the millionaires in ‘Minvera, Mayhem and Millionaires’.

Alfred was required to wear the Bat-suit from time to time – which yeah looked just as ridiculous as that sounds. He put the costume on in instances where Batman and Bruce Wayne had to be seen together. These instances can all be found on a few season two episodes; ‘Walk the Straight and Narrow’, ‘Catwoman Goes To College’ and ‘The Jokers Epitaph’.

If Alfred needed to travel alone, he had his ‘trusty Alf-Cycle’ – essentially a well maintained bicycle. If ever he found himself in trouble he had a two way radio or an emergency button hidden in his belt-buckle that would signal the dynamic duo in the Batcave.

“I was actually the first person hired for Batman before Batman or Robin or anybody, because Charles FitzSimons was an associate of my agent years before and had moved on to be Doziers assistant. He, for some reason envisioned me as Alfred because, after all, what I did as Alfred was quite different from what was written. He sold the idea to Dozier, and I was hired. I had never read comics before I did it. My agent rang me up and said ” I think you are going to be on Batman”‘ I said What is Batman ?” He said don’t you read the comics? I said no, never. He said I think you are going to be Batman’s butler. I said how do I know I want to be Batman’s butler? It was the most ridiculous thing I had ever heard of. He said It may be worth over $100,000 So I said I was Batman’s Butler.” 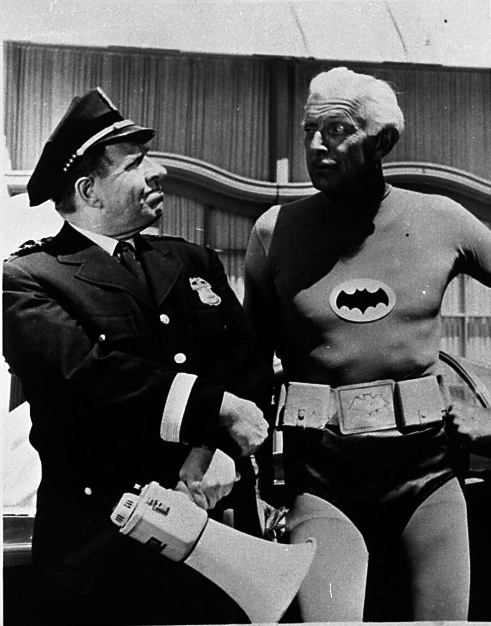