Batman is the crimefighting alter-ego of millionaire of Bruce Wayne, who in 66 Batman is portrayed by the legendary Adam West. During the 66 Batman series we rarely hear about background stories to characters, which ironically at present is the polar opposite as everything we seem to get on TV and film is origin stories. However, early in the very first episode/pilot Bruce is having what appears to be an informal meeting at Wayne Manor regarding rehabilitation programmes, where he says; “… perhaps if there had been anti-crime centres as proposed at the time when my parents were murdered by dastardly villains”. Later on in the episode Bruce is mulling over Riddlers attempt to sue our heroes for wrongful arrest with Dick Grayson (his ‘youthful’ ward, also Robin). Bruce alludes to the fact his late father was a lawyer and comments; “I’ve been looking through my fathers old law books, it doesn’t look like we have a leg to stand on…. Everything I’ve trained myself for since my parents were murdered, are gone up the chute!”.

Batman is the ultimate detective, he is not the fantasy type superhero with superpowers such as Superman or Spiderman. Bruce has used his multi-millions to try to ensure what happened to his own parents does not happen to anyone else. In the Batman incarcerations we see today, the character certainly is violently avenging the death of his parents. In our beloved 66 series the character is all what is morally right in the world and respectfully uploads the law as in his own words; “a duly deputised agent of the law”.

At the end of episode 4 ‘The Penguin’s a Jinx’, at a party inside Wayne Manor, Commissioner Gordon mentions that the reason why Batman has taken on the form of a Bat is because; “nothing strikes more fear in a criminal than the shape and shadow of a huge bat”. This fits in with the story from the comic books where Bruce is startled by a bat outside his window and decides to dress like a bat to create superstition and instil the fear inside criminals.

Adam West was born in Wala Wala Washington in 1928. He was actually born as William West Anderson but changed his name to the more dynamic Adam West in 1957. Before Adam landed in Hollywood he was a disc jockey in Hawaii and a radio presenter for the programe “The Kini Popo Show”. When Adam landed in Hollywood in 1957 he enjoyed fame in the show “The Detectives” just before he played Batman.

When Adam was asked to consider the role as Batman he replied; “are you serious, I am trying to have a serious career”. Nether-the-less, he auditioned for the show, was filmed in the screen test and chosen for the role as Batman, which later became his signature role. Supposedly the reason why Adam West caught the eye of ABC executives was because they had remembered him from being a corny secret agent in a Nestle’s Quick commercial in the early 1960’s.

When asked in an interview in 1966 about the production of the show, Adam said; “The demands are so inordinate that I must get away from it all every weekend at the beach. I’m not Superman. I’m just a Batman. How long will I stay with the show? As long as the quality level and the kooky aspects are maintained. Batman is a projection of James Bond, only more far out. It’s a craze-wave phenomenon. It’s hard work. I’m earning my money. We shoot every day, except weekends. I work from 7 in the morning to as late as 12 at night. The show you saw last night, was rushed by jet to New York with the print still wet. We will not have the regular summer hiatus. We have to get some shows behind us. The things I have to do…. Today I’m working in a chimney full of gas!”

“Adam was so proud of being Batman. He was in such demand and was always going off to some place to appear in arenas or football coliseums and everything. Coming out in his Batman outfit and all and he loved every minute of it” – Cesar Romero (Joker)

“An agent came in and showed me an 8 by 10 of a guy with a surf board. He said what do you think of this feller? I said who is he? And he said his name is Adam West.” – William Dozier

Watching the series you would often see Adam slowing down his speech then suddenly ramping up his tone and tempo of his voice, which he did on purpose and often cited that he got inspiration from Basil Rathbone’s portrayal of Sherlock Holmes for this. 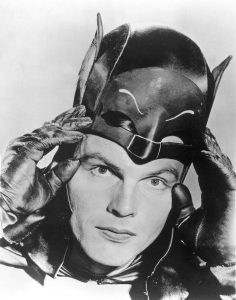 Adam West is the only actor to play Batman who actually is the same height at Batman according to the comic books.

In 1970 he was asked to audition for James Bond, with senior members of the Broccoli team citing that he is Bond. Adam declined to audition as felt the role should be taken by an Englishman. Looking back at the era of James Bond, Adam for me is clearly Roger Moore-esque (if that makes sense?!).

However, after his huge success as Batman, Adam was heavily type cast and found it difficult to find roles elsewhere. This led to drink problems which ruined his first marriage. Interestingly in the first season of ‘Batman: The Animated Series’ in 1992, Adam voices a character called ‘Simon Trent’, who is an unemployed actor whose struggling to find work as he can’t escape his identification for portraying a superhero called ‘The Grey Ghost’.

Thankfully, since his marriage to Marcelle Tagand Lear in 1972, Adam’s life turned around, since then he has accepted that he is Batman and has done several projects/apperences as Batman since. He voiced Batman for 16 episodes of the 1977 ‘The New Adventures of Batman’ cartoon. In 1994 he published his autobiography entitled “Back to the Batcave”.

During the 1970s & 1980s in particular he made several guest appearances on various TV series such as; Murder She Wrote, Maverick, Fantasy Island and Diagnosis Murder. 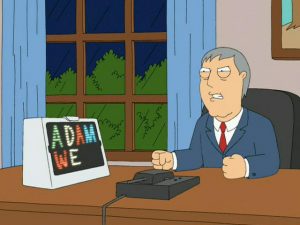 At the end of his career he was better known for his voiceover work, most notable as Mayor Adam West in the popular ‘Family Guy’ series.

“Batman broke hot, it broke very big and naturally that’s a wonderful thing to a be part of.” – Adam West 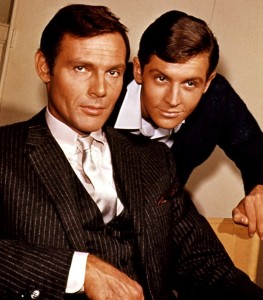 Adam West – “We had regulars who were skilled at ensemble playing and I considered myself to be the anchorman. I tried to put everyone at ease, and provide an appropriate perspective about what the show was supposed to be. I thought Burt Ward was beautifully cast but we came from different backgrounds, and from different generations. We never spent much time together socially. Burt was very young when we started filming the show. He must have been extremely insecure because it was his first acting role. Working long hours so closely with someone, you need to protect the limited amount of free time you have left. I am sure Burt did not want to see my face around during his free time either.”

William D’Angelo (producer of various episodes) – “Adam West never learned a line. We had to get him a Teleprompter which was hysterical. Because we had guys like Burgess Meredith (Penguin) come in who knew every word. Even Tallulah Bankhead (Blackwidow) in her dying days remembered every word…. If you look closely at any of the episodes, look at his close-ups and you will see him under the cowl reading left to right.”

On April 5th 2012, Adam was honoured with being awarded a star on the Hollywood Walk of fame.

Hollywood Chamber of Commerce President Leron Gubler said; “We are thrilled to honor Adam with this prestigious award. Fans have been waiting for this special day for many years. Adam West fired up the billion dollar Batman franchise: the golden years and the classic Batman, the Bright Knight. He deserves his place of honour on our famed Walk of Fame.”