Gotham City’s Mayor who rarely gets involved with police matters but will step in whenever need be. Mayor Linseed featured in ten episodes of Batman which are;

I’d probably say that the Penguin two-parter in season two and the Nora Clavicle story in season three were the Mayor’s most prominent or notable appearance’s. This is because his character was the main key to the whole story. In other episodes he was usually involved in short cameo appearances.

In season two it’s the Mayoral elections where Penguin tries to run a campaign against him, which was almost successful. Penguin was ahead in the polls and looked like a certain winner however, Batman runs the campaign on Linseeds behalf and eventually wins. 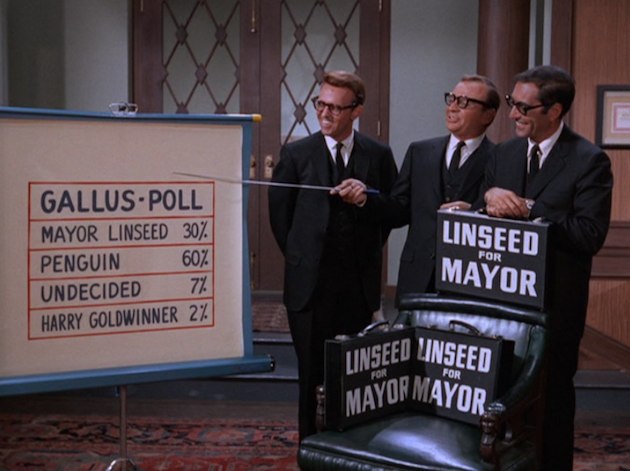 For the third season episode the Mayors wife pushes his hand to denounce Commissioner Gordon and to give the job to Nora Clavicle.

The character was written onto the show as a spoof of the Mayor of New York at the time, Mayor Lindsay (Wikipedia to open in new tab) who served between 1966 and 1973.

He is probably best known for playing Lieutenant Roy Gilmore for the ’77 Sunset Strip’ television series between 1958 and 1963.

I have not got much information regarding Bryon Keith. If anyone has any interesting trivia or such like please contact me.