Robin is an 15 year old American teenager who attends Woodrow Roosevelt High School, his true identity is Richard (Dick) Grayson who is Batman’s aid in crimefighting. Dick Grayson is the ward of Bruce Wayne where they live together in Wayne Manor, with Aunt Harriet and Alfred the butler. Robin is unable to drive the bat-mobile until series three when he receives his driving license. Robin is most known by his “holy” phrases.

Dick was the youngest in his family of acrobats, they called themselves the “Flying Graysons”. Unfortunately Dick watched his parents being killed by a mafia boss who was trying to take money from the circus which the “Flying Graysons” worked for. Bruce Wayne AKA Batman takes Dick Grayson in as his ward. 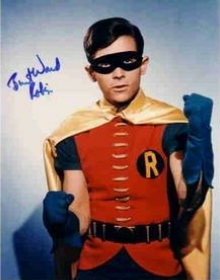 “I was studying acting at UCLA where I was going to college and I was trying out for acting parts and I sold a house to a producer who sent me to an agent and the agent sent me out for the part (Robin) and its the first thing I really tried out for so I guess I was very lucky.”

“In the first show I was hurt 5 times and in fact on the first day I was almost killed. I said to Adam that if it keeps up like this I wouldn’t make it to the second show. They had all kinds of explosion’s. I remember Adam breaking through the wall of a subway station to get to me, and I was tied up on the Riddler’s thing. The guys were supposed to make a break way set and of course in their infinite wisdom they didn’t, so what they did is instead of using a fake type magnesium explosion, they used real dynamite and nearly blew down the sound stage.”

When asked to give a speech at Harvard about his role on Batman, he brought the original costume, said to be valued at half a million dollars. Some students came up to him dressed as security guards and told him they would keep the costume safe. Then in the middle of the speech, one student stood up and asked, “When is a costume not a costume? When it’s stolen.” The lights dimmed and the students grabbed the costume and made off. After snapping pictures with one another in the cape, they later called Ward and gave the costume back. The ringleader of the gang? Harvard Lampoon editor, Conan O’Brien.

Burt Ward “After They Were Famous” Interview