Stanley Ralph Ross was a key player backstage for the success of Batman. This was because he wrote the most amount of scripts/stories for the show than all the other writers, he wrote a total of 16 stories (27 episodes) for the series. He was responsible most Catwoman, King Tut and Shame episode plus he brought many other new villain’s such as the Archer to the screen.

“When the producers requested another ‘bat-climb’ guest star to be added to an episode, I would have had to come up with stuff that ran around 22 seconds. They would call me up and say, ‘Stanley, we’ve go so-and-so coming in tomorrow.’ Sometimes I wrote it on the set. More often than not, I had a day. That was all decided by Bill Dozier and Howie Horwitz. People were waiting in line to do it. Everyone wanted to be on the show.”

Talking about “That Darn Catwoman/Scat! Darn Catwoman” – “I had used some obscure dirty word’s in the scripts. Obscure in other languages. They got some flack. They got letters from people who thought it was funny that I used these obscure dirty words. But the network warned me not to do that again, I said I would’nt. Then I was doing a show where they had this ‘Sheik’ that had to be weighed. I called him ‘Missentiff of Furderber’. ‘Ferderber’ is a friend of mine, Skip Furderber like furburger, so I changed it to ‘Sheik Ibn Kereb’ which in Arabic means ‘son of a bitch.’ They never caught it!” 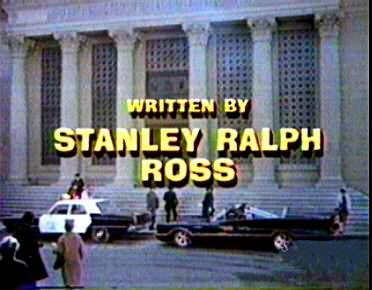 Brief Appearance on the show

Stanley Ralph Ross – “I said to producer Howie Horwitz, ‘I want to be in the show.’ He said, ‘OK, I will give you a part, but if you think you are funny, let’s see how funny you can be without lines.”

So in the episode’s “The Penguin’s Nest/The Bird’s Last Jest” Stanley appeared right at the end of the second part as a character called “Ballpoint Baxter”. Little inside joker here as Stanley’s nickname is “Ballpoint”. Ballpoint is a master forger in which Penguin hoped to use to copy Gotham’s richest citizens signatures to write bank cheques in his name.

Screencaps from the scene: 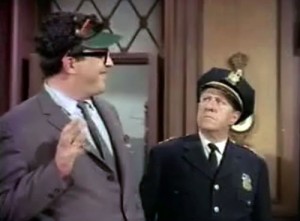 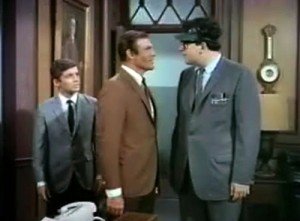 The following video was conducted by “EmmyTvLegends.Org”.

Other shows he worked on:

During the 1970’s/80’s he started taking a more developmental role in shows such as “Wonder Woman” and “The Monster Squad”. Also many TV movies such as “Gold of the Amazon Woman” and “Coffee, Tea or Me?”. He also did a bit of acting in around 60 or so show’s including “Falcon Crest”, “Family Medical Centre” and “Superior Court”. Not only this but he did hundreds of TV commercials and was a regular voice actor on cartoon’s such as “Superman” and “G.I Joe”.