Batgirl’s mode of travel around Gotham City. She accesses the bike from an old unused elevator, hidden behind a revolving wall in her apartment. The elevator lowers the cycle down to an alleyway where she zooms out of the wall and into the street.

“One of the reasons I think they hired me because I had been a dancer. Howie Horwitz, who was the owner, and producer Bill Dozier both knew that. When I went into the office to talk to them, they also asked me if I had ever ridden a motorcycle, which indeed I had and owned one at the time. I did all of my stunts, and I also did all of the motorcycle riding. However, we never did any film mixing with rear screen projections. You never really saw me going fast down the street on that thing, as I recall, from a head-on point of view. I always was going somewhere, and they just filmed where ever I was going.” 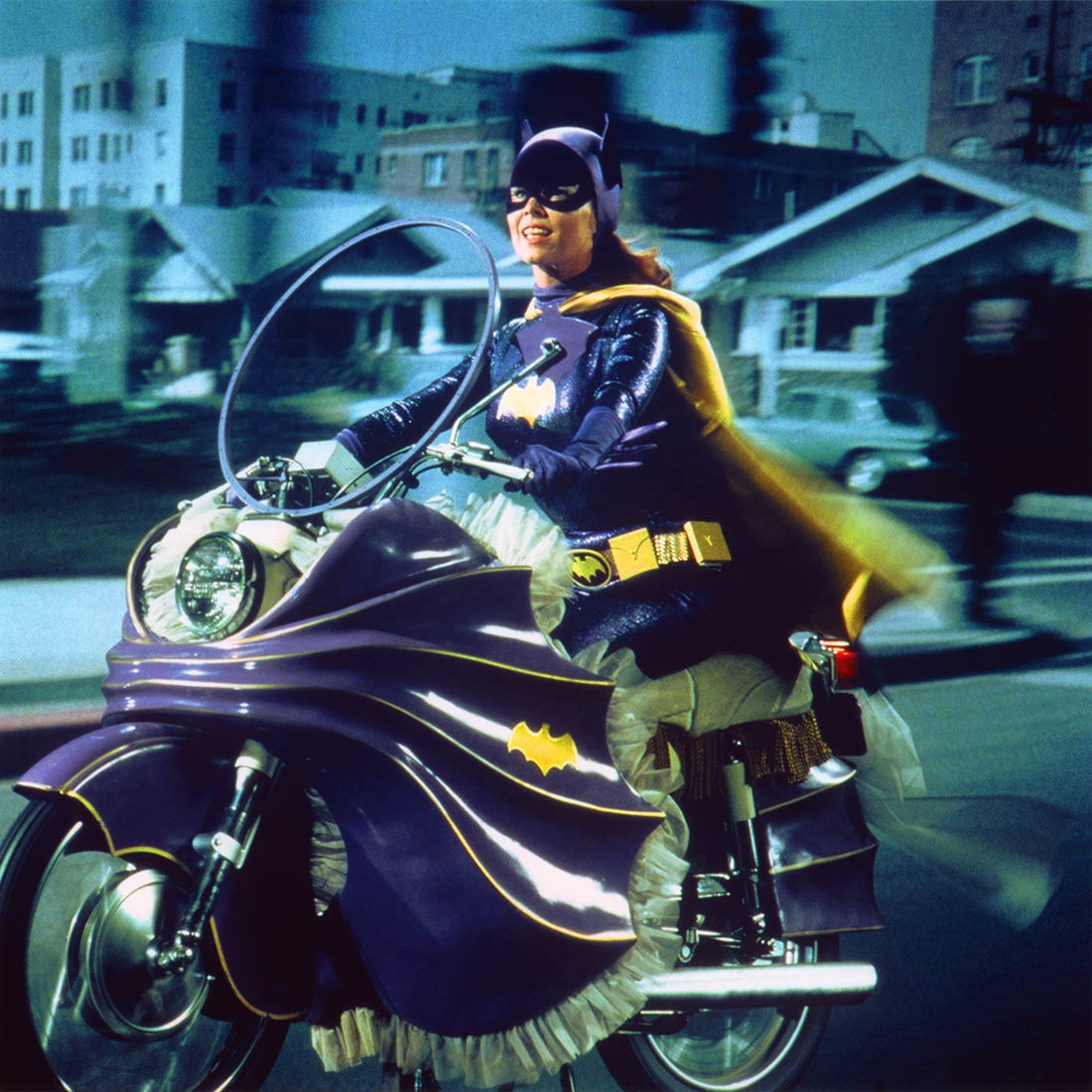 “The motorcycle ride out of the secret exit was an interessting episode. It was the first day of shooting, and I knew the special effects man from somewhere else in Warner Brothers. I had been praticing riding out because I was supposed to ride through a brick wall. It was set up like a long tunnel, and he said, ‘Look, if you hit this mark and you at that point absolutely stand on it and give it all you got, it will look like you are riding the wall down. It will be real exciting.’ I said ‘Terrific!’ So, I did exactly as he said, but a little voice in my head said, hand close to the brakes because, it something goes wrong, you would like to be able to hit the brakes.”

“Sure enough, the first shot of the day, I went tearing out, and the wall did’nt come down. I was made of plywood and I would’nt have liked to have gone through it. I hit the brakes, and I went skidding sideways, missing the wall by about an inch. Nobody on the other side knew what was going on. They figured somewhere along the line I had chickened out and decided not to do it at all. Anyway, it worked the second time around.”

I have tried my best to find as much information as I can about Batgirl’s bike however, it has been a struggle! The bike was first featured in the unaired ABC 1967 presentation or sometimes referred to as the unofficial ‘pilot’ for season three – you can watch the pilot through a link on my video webpage. The bike featured in this is different from the bike which was eventually used throughout season three, that is 100% fact. The story behind that bike is not however clear. A company called “Kustomotive” had a contract worth $500 to produce a Batgirl Cycle to be used for “A Batgirl Promotional Film” but the make of that bike is unknown, and the reason why they did not continue using that bike for the series is also unknown. Logic suggests that Fox and Greenway Productions did not like the design, and to be honest it did not look anything special – I mean to be fair, they was only given $500! The original/pilot bike is show below.

Now here is another gap in the puzzle… For yet another unknown reason Yamaha sent a YDS-5E motorcycle into Greenway Productions at Fox. The prop department at Fox Studios in California customised the bike to how you see it during season three. Unlike say the Batmobile where five were produced, only one Batgirl Cycle was made.

Subsequently when the Batman series was cancelled the Batgirl Cycle was sent back to Yamaha, still in its modified state. What happened to the bike when it got sent back to Yamaha or where it is now is anyones guess? I can only assume the bike from all this is that the bike was leased by Fox/Greenway Productions and was sent back to the owners after the season was film – or maybe it was sold back for a profit and used for staging in various car or comic book conventions? I’m none the wiser.

I have had a e-mail come through to me from a person using the initials ‘TM’ who has given me a fascinating insight into the history behind the backstory regarding the Batgirl Cycle & ties up some of the loose ends I have mentioned above.

TM explains; “Regarding the Batgirlcycle, I knew Richard Korkes (one of the partners of Kustomotive) and have documents from 20th Century Fox regarding the motorcycle. Yamaha provided a motorcycle of undesignated model to Kustomotive in late 1966 to modify for the Batgirl film. As of January 24, 1967, Fox, Greenway, and Kustomotive entered an agreement acknowledging the $500.00 payment to Kustomotive, and promising an additional $800 to Kustomotive if the Batgirl character and the cycle was used in the television series. Fox and Greenway also agreed to pay $50 per week in rent, up to a combined maximum payment to Kustomotive of $1,800 in connection with the television show. On May 25, 1967, Yamaha sold Greenway a red YCS1, engine no. 4436 for a total of $431.60. It was registered to 20th Century Fox (according to the invoice sent to Charles Fitzsimmons). Yamaha also sent him a letter on May 25, 1967 offering to buy back the motorcycle for $374.00 at any time in the following 18 months. In early 1968, when props from the series were being returned, Yamaha expressed its desire to receive the motorcycle in built-out condition so that it could exhibit it at car shows and the like. National Periodical Publications favored this option, but wanted to have more control over royalties and use of the Batgirlcycle. Fitzsimmons argued that Yamaha’s exhibitions would provide needed exposure for future syndication.”

Thank-You very much TM!! As always, if anyone has any insights regarding the Batgirl Cycle or anything 66 Batman related at all for that matter, please contact me using the contact form found on the top right of every webpage.

Picture below is of a typical Yamaha YDS-5E. Hard picturing this as a Batgirl Cycle eh! 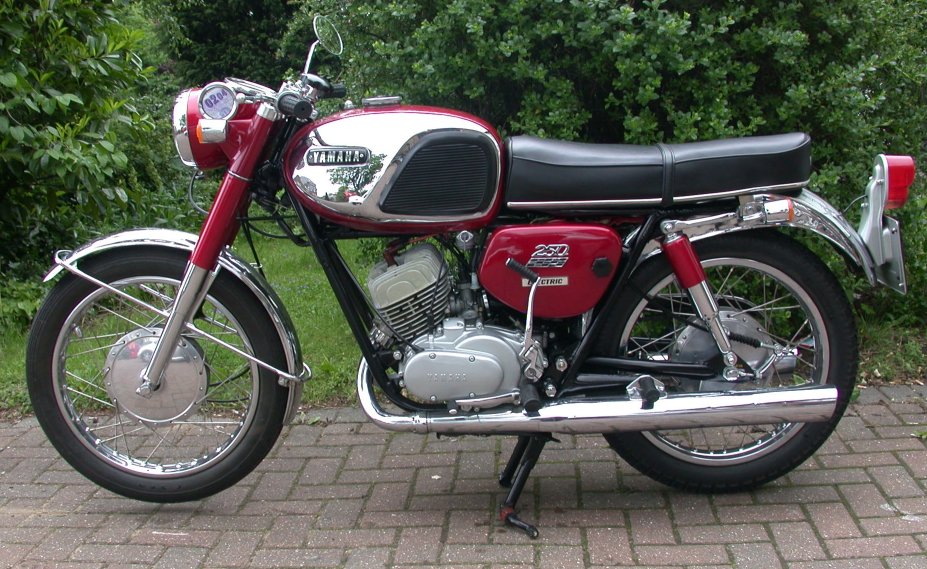