The 1966 ‘Batmobile’ was design by George Barris. It was a conversion of a 1955 Lincoln Futura (pictured below). The Futura car when released was revolutionary for its time as it was amongst the first to feature gauges, such as temperature and fuel, which in the modern day we take for granted. 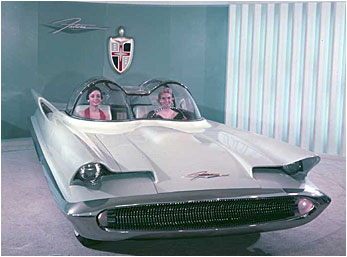 “In 65 I was contacted by Dozier, ‘were doing Batman we want to have a Batmobile but we don’t want to have Bob Kanes 37 Lincoln Zetra with a cut out batface on the front, we want something a bit more modern. What can you do?” – George Barris

The reason why Barris decided to convert a car rather than make a design from scratch was due to the tight deadline given to him – he barely had three weeks to turnaround the project given to him. The Futura was decided from what I understand to be two reasons which go hand-in-hand, the first simply being Barris had the car already, the second was the specification/concepts given to him by Fox productions matched suit with the design of the car.

What I have always found as an interesting piece of trivia and actually a very good financial move on behalf of George Barris, was that he made the car but kept ownership of the car. Greenway Productions & Fox would lease the car from him when filming the season. Subsequently four replica cars were made for filming so five in total, the original always remaining the property of George Barris.

The original car cost around thirty thousand dollars to make and couldn’t reach speeds faster than 45mph therefore, the footage of the car driving was sped up in production.

Burt Ward (Robin) – “When filming the footage used of the Batmobile racing out of the bat-cave, where we the sign comes down and we make that sharp turn to head towards Gotham City. As we made that sharp left turn, my door swinged open and I managed – totally by luck – to catch the gear shift with my little finger to hold me in the car. It completely took my finger out of joint – the team said to me you will to get you to hospital to get it fixed. So I asked where the nearest is to go now but was told; ‘we have not got the shot we needed, we will need to re-film that first whilst we have the car here’. So I had to wait until they got the footage needed before I was allowed to get my finger fixed!”

The Batmobile was heavily sought after, so much so that throughout the series many villains attempted to make it there own by stealing it they include; The Riddler, The Bookworm, The Penguin (re-brands it as his Birdmobile), King Tut, The Sandman and Catwoman.

Watch the video below where George Barris himself talks through the various designs and features of the Batmobile.