False Face is the master of disguise, he would fool anyone, he can change himself to look like anyone. He even disguised himself as Chief O’Hara and Commissioner Gordon to fool our heroes.

“Originally False-Face was to be done with make up, but due to production problems or decisions a plastic mask was used instead. It was a good character , but the problem was that the mask came out rather ugly and uncomical when photographed. The mask was bad, and it prevented the character from repeating because there was no response to the character. Although I felt my work was good , it would have been better had they stuck to the original concept- different facial disguises. Also the concept of False Face not being headlined was my idea. The question mark in the credits was the producers choice, but during a contractual argument I insisted that my name be withdrawn from the credits since there was going to be no face on it and no real acting. I was irate enough to say, Anyone could have played that part behind that kind of mask, so please withdraw my name from the credits. In the meantime a huge amount of publicity arose from that with regard to what had leaked out not with regard to me but with regard to whether Frank Sinatra was playing the part or Sammy Davis was playing the part, or Cary Grant, because everything was so celebrity conscious during the early days of Batman.So everybody in town was having a good time guessing who was playing False Face. Director Billy Graham cast me in it even though I was not on the same name level as some of the other people. That was like a coup, but they pulled the rug out from under me with that stupid mask.” – Malachi 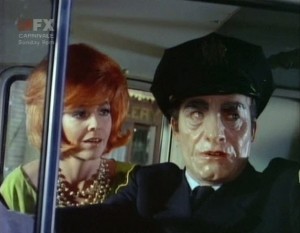 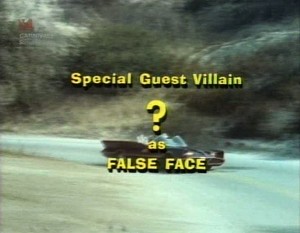 False Face wore a mask so it was difficult to know who was actor was playing False Face. So the producers credited him as “?” except on the last episode, at the end where the credits are shown Malachi was credited.

These episodes are based on a June 1958 comic book story.

During the scene at the Bioscope Studios, where Chief O’Hara drives up to the false Batmobile, look into the rearview mirror as you are able to see a cameraman, who is in the back seat of the car.

False Face only appeared for one storyline. The character never returned as the False Face mask scared younger viewers.