“Wait a minute! Have I missed an episode?!” – I hear you cry. Well, if you have checked out the ‘bonus features’ section of your BluRay/DVD box set then you would know that the Killer Moth appeared in the 1967 ABC Network presentation. This presentation was around 8-10 minutes long, not broadcast on TV but shown to network executives near the end of the second season of Batman, as an successful attempt to keep the show on the air for a third season. Viewing figures were falling, William Dozier and those producing Batman had the idea of introducing Batgirl to the mix to freshen-up the series. Killer Moth was the villain used for that presentation – essentially a pilot of the third season. I’m going to refer to it as a ‘lost episode’ for the intensions of this webpage.

Before fans got to see this episode under the ‘bonus’ section of the BluRay/DVD release, it had already been widely seen in the fan community as was heavily circulated online. If you like, I would recommend checking out this external webpage from the TV Obscurities website – it includes a nice article/webpage with more background info on the presentation.

Killer Moth and his thugs are inside the Gotham City library. They spot Bruce Wayne and think about kidnapping him however, Killer Moth points out that he is close friends with Batman and that it would be too much trouble. They instead attempt to kidnap Roger Montrose, who is another millionaire – who happened to be in the library with Bruce Wayne & Dick Grayson, once the library closes as people leave. Barbara Gordon is locked into an office area of the library, where she changes into Batgirl via a secret panel (which when season three was made was actually placed inside her apartment). The dynamic duo make it onto the scene shortly where a bat-fight takes place, Killer Moth is captured. Check out the video section of my webpage to find a link to the presentation. 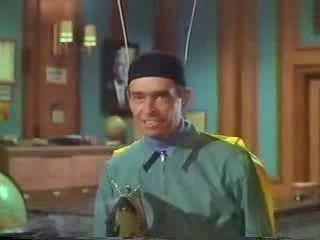 Killer Moth was played by actor Tim Herbert. Who actually had featured in Batman before, during the first season he played one of Riddlers accomplices ‘Whiskers’ in the episodes; ‘A Riddle a Day Keeps the Riddler Away/When the Rat’s Away, The Mice Will Play’. Not much information around on Tim, he appeared to have a very brief career on television appearing in various guest star appearances on shows such as; ‘The Addams Family’, The Lucy Show’ and ‘I Dream of Jeannie’.