When Professor William MacElroy of Egyptology at the Yale University gets a bump on the head, it activates his double personality as King Tut. In the episode “King Tut’s Coup” we learn that William wears a hard bowler hat to prevent his head being bumped, but when he took it off unfortunately a plant pot gets knocked off a window ledge and hits his head. King Tut believes that he is the rightful owner of Gotham City and wants it for his own. He is the Jekyll-and-Hyde character in the Batman series.

King Tut was the most frequent villain in the show outside the top four (Penguin, Catwoman, Riddler and Joker), appearing in all three seasons with eight episodes in total. 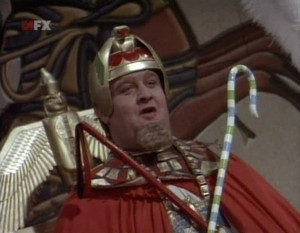 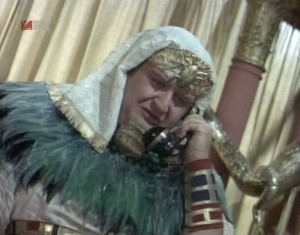 Victor Buono: “Batman allowed me to do what actors are taught never to do, overact”

Lee Meriwether (Gets kidnapped by King Tut as Lisa Carson): “Victor was wonderful. Victor said to me one day on the set that he knew that he would not live past 32. That was one thing I remember about our conversations -well, that and Shakespeare. He was so talented; he was very gifted. But I don’t think he ever really thought that anyone ever would believe the talent that he knew he had. He was having a lot of fun on the show!”

Victor had a passion for literature and the theatre, having a deep interest and love for William Shakespeare. He guest starred in various television series throughout the 1960’s and 1970’s including; Perry Mason, The Wild Wild West, The Man from U.N.C.L.E, Voyage to the Bottom of the Sea and Hawaii Five-O.