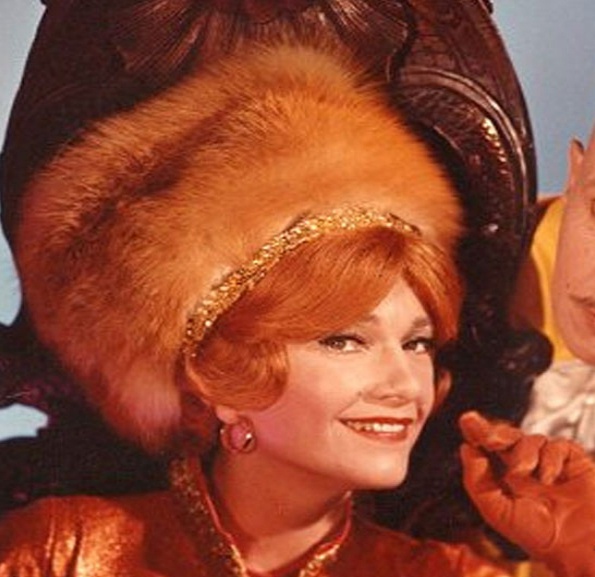 Olga is queen of the Bessarovian cossacks, she’s basically Russian… She was married to Egghead who had returned to the show, the two worked together for three episodes in the third series. # 102 “The Ogg And I”, #103 “How To Hatch A Dinosaur” and #109 “The Ogg Couple”

Anne Baxter: “The set for Olga was absolutely crazy. The costuming alone was hysterical, like reaching into your old dressing-up box as a kid. That red wig–they kept putting nice quiet reds on me, and I said, ‘No, no, no. We wanted red'”.

Anne Baxter: “I had a Russian friend, and I was supposed to swear at my platoon of Cossacks, so I said ‘How do I say, “Stand still” and military things?’ I wrote them down phonetically, and when I rattled them off, they came to me and said, ‘They sound like swear words.’ I said, ‘Wait a minute; I’m doing Russian,’ but it sounded like ‘S.O.B.’ However, she [Olga] does spout Russian.”

Before Anne Baxter played Olga in the series, she played “Zelda The Great” in series one!

Olga Used to be a dishwasher at a Bessarovian restaurant

The episodes Olga starred in (are listed at the top of the page) was originally a three parter, but the producers split up the episodes to have a two parter, #102 & #103 then show the ending as #109, I say ending but when they split up the shows #103 was not a join onto #109 the story started as Olga and Egghead return to Gotham…