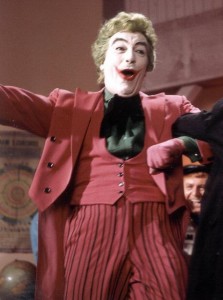 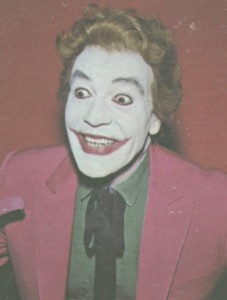 The Joker AKA the Clown Prince of Crime. We find out in the episodes: “The Impractical Joker/The Joker’s provokers” that before the Joker embraced the life of crime he was a successful hypnotist.

Cesar was born into a wealthy family on February 15th 1907. His parents used to import sugar from their native country Cuba into the United States. However the Wall Street Crash in 1929 wrecked the Romero’s family business. Luckily Cesar’s natural ability to dance/perform allowed him to support the family on stage then eventually the big screen in Hollywood. Most of Cesar’s dance ability is thanks to a maid who used to work and look after him when he was a child back in the family home.

Throughout the 30s, 40s and 50s you would usually find him playing the role of the “latin lover”. His notable films include; “Ocean’s Eleven”, “Captain from Castile” and “Weekend in Havana”. There was a gap in his movie career during the early 1940s as in 1942 Cesar enlisted voluntarily in the US Coast Guard to help the fight against fascism in the second world war. During t he 60s Romero was starting to age which made him find it more difficult to play in the young roles of “latin lovers”, this is when he began making appearances on TV.

At the age of 58 Cesar got the role as the Joker on Batman! He made his first appearance on the 26th January 1966 with “The Joker is Wild” episode. 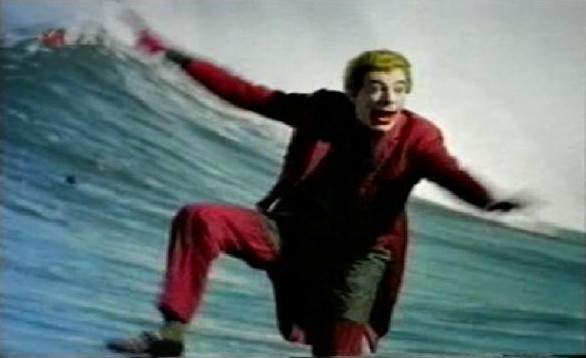 Adam West: “Cesar Romero brought in an enormous amount of energy to the role. His piercing eyes, his laugh.. I dunno how he did it because he wasn’t 22!”

Charles FitzSimons (producer): “He’d have a great inner force and as a Joker he let that lease.”

Cesar Romero: “The make up took about an hour to put on, but the wig was a thing that bothered me more than anything else. The wig was green, of course, but it sometimes photographed red, yellow, — everything but green. They would glue the wig to the front of my forehead, and after a while it would give me a headache.”

Cesar Romero : “I was very surprised when the producer of the show called me and said he was doing a series called “Batman” and the important characters were the villains. They had done the first two with the Riddler and the Penguin with Frank Gorshin and Burgess Meredith, and now they were ready to do a third, and the villain was the Joker. He said,”I would like you to play the part.” So, I said I would like to read the script and know what it’s all about. So he said, “Come over to the studio, and I will show you the film of the first episode.” Of course it was great. I said, “Let me read this Joker part, and if it’s as good as the first one, hell yes, I will do it.” So I read the script and I thought it was a gas, and I said, “Sure, I’ll do it.”

Cesar Romero: “Once you get into a costume with the make-up on and the wig. You change completely and you fall right into it. And it was actually a very easy character to play. Just whooped it on, laugh and scream and you know was a ball to do.” 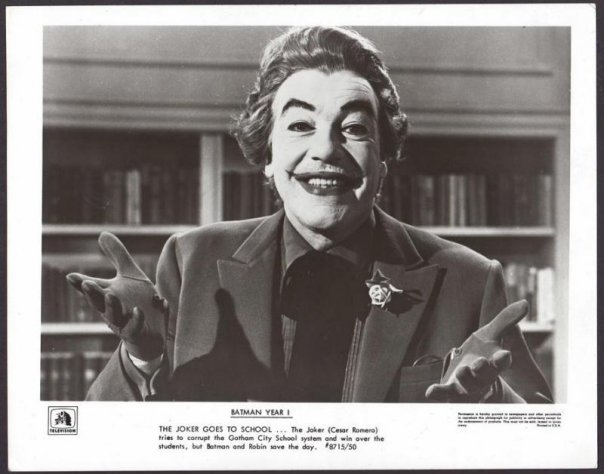 Cesar Romero: “When I get into an outfit like that, i’m not going to go oh haha. I’m going to go OOH HAHAHAHA.. you fall right into it. I thoroughly enjoyed playing the Joker”.

Cesar was never married nor had any children which did spark some suspicion that he was gay. However being a devout christian and being seen with loads of women at Hollywood parties has put a lot of doubts over this accusation. 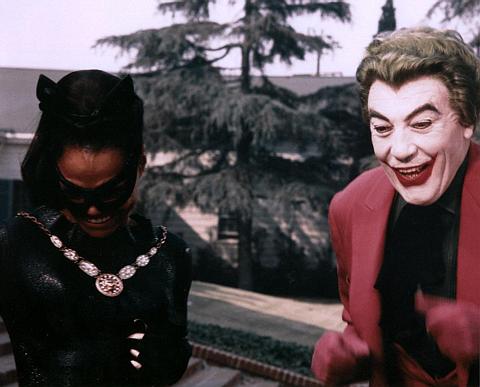 Cesar Romero refused to shave off his moustache. Close observation shows how the white clown make-up was applied right over his much loved moustache.

Adam West: “He said I want to keep my moustache, which we found odd. But when you think about it, throughout his long career he is always seen with a moustache. So we said ok we will just plaster the white makeup over it.”

A common villain in the show appearing in 19 episodes.