The waddling bird of foul play. The Penguin was so popular that the producers always had a script ready for the Burgess in case he came to town. The Penguin usually likes to pretend he has gone straight to foil our heroes.

Burgess : “I did Batman for two reasons, one of which was salary. The other was that, after its first few episodes, Batman became the in-thing to do. Everybody including Frank Sinatra would either play a villain or appear as himself in that cameo showcase where a celebrity would poke his head through the window of a building that Batman and Robin were climbing. I even remember Otto Preminger saying to me, “My god, My son won’t speak to me unless I get a job on Batman” Eventually, he got in ! Actually, we didn’t get as much money from the show as you might think, although we were paid decent money for the feature film version. The main impetus to continue appearing on Batman – beyond the desire to get some T.V. work – was that it was fashionable.” 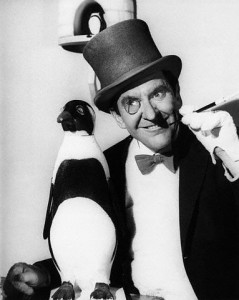 Developed his grunting “Penguin” laugh out of necessity. Meredith had given up smoking some twenty-odd years earlier, but his character was required to smoke with a cigarette holder. The smoke would get caught in his throat and he would start coughing. Rather than constantly ruin takes in this matter, he developed the laugh to cover it up.

“Actually, it was a pretty funny noise for a penguin to make,” said Meredith. “I sounded more like a duck.”

Needless to say, Meredith gave up smoking again immediately after the series ended.

Burgess was actually the second choice for role. Producers had originally wanted Spencer Tracy however, Tracy wouldn’t sign unless his character was allowed to kill Batman. Obviously, they did not want to kill the main character, so the role went to Meredith.

He was so popular a villain in the TV-series the producers always had a “Penguin” script ready in case Meredith would like to appear as a guest star.

Was offered the part of The Penguin’s father in Batman Returns (1992) (which eventually went to Paul Reubens), but couldn’t film it because of his delicate health.