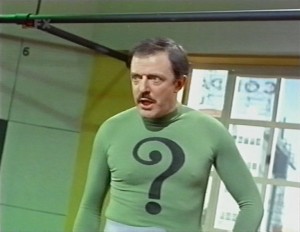 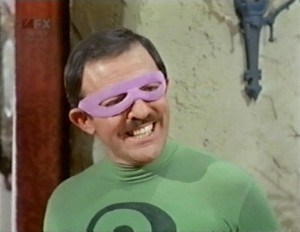 John Astin takes over for the second season’s only Riddler appearance. The reason was due to Frank Gorshin asking for a pay rise for the second season as he felt he deserved so after he was the star of the first season, with being the most prominent villain of that season and also being nominated for a bafta with his role as Riddler. However, William Dozier denied his request but still hoped he would return as Riddler. Producers even changed a storyline from the Riddler’s to the Puzzler in hope Frank would still return. But with the end of the season nearing closer the production team simply gave up and gave the role to John Astin.

Although saying this, this has always been refuted by Frank who claims the reason why he turned down appearing in these episodes was a prior commitment he had doing work for a regular night club gig he was working at. 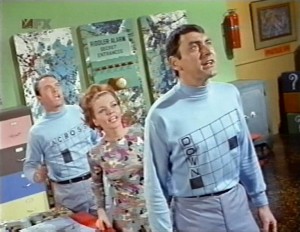 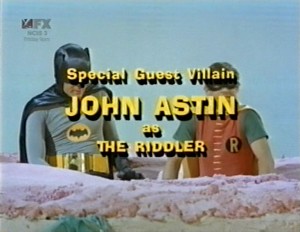 John Astin is better known for his role in “The Addams Family” where he played the character “Gomez Addams”. Like Batman the show was broadcasted on the ABC Network and lasted from 1964 until 1966. Another character from “Addams Family” had appeared in Batman before, “Lurch” featured in the episode “The Penguin’s Nest”. Coincidently another Adams Family co-star appeared on Batman’s second season, Carolyn Jones as Marsha Queen of Diamonds.

John Astin was not as popular as Frank in the role as Riddler, he had to whacky laugh or did not have much energy but he still put up a good performance in his role. For me John’s Riddler was more sneaky. When Batman and Robin entered through the window the Riddler had a device which made the ledge collapse into sharp points which I thought was rather clever! 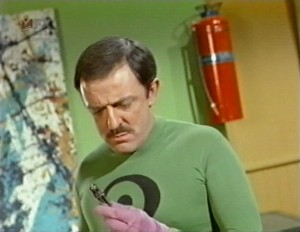 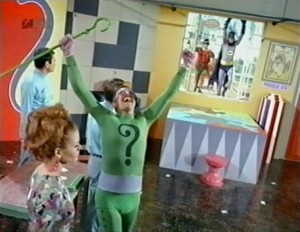 John Astin’s story was based on the 1948 October issue of the Batman comic book.

Unlike Frank’s Riddler, John did not have the suit costume but he did have a sort of stick/pole type thing, you can see what I mean in one of the pictures above.