Anne Baxter who played Zelda in the series, also played another villain in season three called Olga Queen of the Cossacks. Anne had a healthy career spanning almost 50 years. She is maybe best known to many as appearing in the 1946 film ‘The Razor’s Edge’ where she won two awards for in 1947. The first being a Golden Globe for the category ‘Best Supporting Actress in a Motion Picture’ and the second an Academy Award for the same category.

Zsa Zsa Gabor (who of corse later played Minerva in season three) was initially in mind to be casted as Zelda.

Zelda The Great / A Death Worse Than Fate

These were the first episodes in the series to not only feature a female villain but to feature one that was created for the series. Like many of the first season episodes it was the work of Lorenzo Semple Jr.

Zelda is a world renowned escape artist, in the second part when Batman deduces who is behind the crimes Robin exclaims; “Holy Birthday Cake!” as indeed Dick Grayson went to one of Zelda’s shows for his birthday in the past. Zelda in reality is a fraud, the escapes she’s world famous for were devised by an ‘evil Albanian genius’ called Eivol Ekdal. For me Eivol is the true villain in this story as he has created an ‘Inescapable Doom-trap’ in which he does not know how anyone can escape, he plans to trap the dynamic duo inside as he feels that they are the only true escape artists who will show him how to escape the trap (if they do they would be murdered instantly by gangsters hiding outside).

Each year on April Fools, Zelda robs the Gotham National Bank for $100,000 to finance Eivol to invent her new traps which she can take around the world and profit off of performing. In this story Commissioner Gordon explains that this is the third year running and the police department have no clue at whose behind it so a call to Batman was in order!

The highlight for me in this story is when Zelda kidnaps Aunt Harriet to hold her for ransom after she deduces that Batman has set a trap for her in the newspaper, by hanging her over a fire pit. It’s the first time we hear the ‘Same Bat-Time, Same Bat-Channel’ at the end of the first episode, with the earlier ones dropping the ‘Bat’ part. When you watch the scene today on our remastered box sets its simply hilarious as it’s so obviously a man hanging over the fire pit.

The reason why Aunt Harriet is taken was the actual fault of Batman. He tries to set a trap for Zelda by planting a story in the newspapers that the money she stole is counterfeit, in a TV broadcast Bruce Wayne alongside Commissioner Gordon admit the money she has is real. When our heroes go after her they find themselves trapped in the doom-trap, Zelda has a change of heart and doesn’t want to go through with the murder of our heroes so when they escaped she goes against Eivol and warns them.

At the end of the story we see Bruce visiting Zelda in prison, as a special thanks and an aim to keep her on the straight and narrow, he offers her a job as a magician at a children’s hospital after she’s paid her debt to society.

For many years I had thought the character had been created for the 66 series however, he was taken from the comic books. The character was played by Jack Kruschen. I was half and half debating to create a villain webpage of his own but seeing as in the series he wasn’t created as a ‘special guest villain’ I decided against the idea however, thought he certainly deserved a mention/section on the website. Eivol appeared in the story entitled ‘The Inescapable Doom-Trap’ for issue 346 of Detective Comics. Where in the comic story its a male escape artist called Carnado who works with Eivol to trap our heroes. 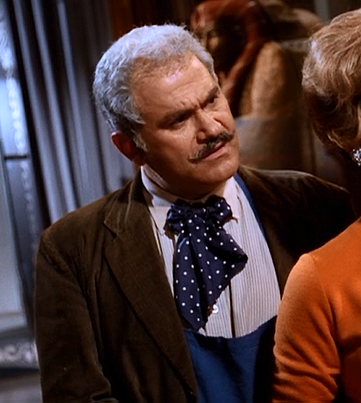 In a memo from William Dozier (executive producer) to Howie Horwitz (producer) from 27th Jan 1966, Dozier writes that; “we should never have more than one central heavy in a one hour segment. Zelda is an example of a bad result in splitting heavy responsibility, although none of us were clever enough to see this in the script”.

Not too sure what to make of that comment as it implies that Dozier was not keen in the dynamic of having two leading villains.

He also goes on to say; “Our heavies must be almost exclusively male. Catwoman, a revered and established heavy from the comic books is ok, but otherwise we stick to men. We can involve Batman and Robin in more physical action with them”.

I have a bit of contradictory second statement from Dozier I found from a few months before in November 1965. Where Dozier says; “we must work dames into these scripts wherever feasible”. So not sure what the change of heart is there. I can only assume the feelings were directed by actual TV ratings and public opinions. As in the season two Black Widow episodes I understand that they almost never went ahead as ABC at the time thought the male villains were more popular. Reading between the lines of both these memos, the comic story was adapted by Lorenzo Semple Jr. to include a female villain.

We have two instances which is unique to the series where the fourth wall is broken twice ie the characters speak directly to the audience at home. The newspaper seller and Zelda herself do so in the first episode/part.