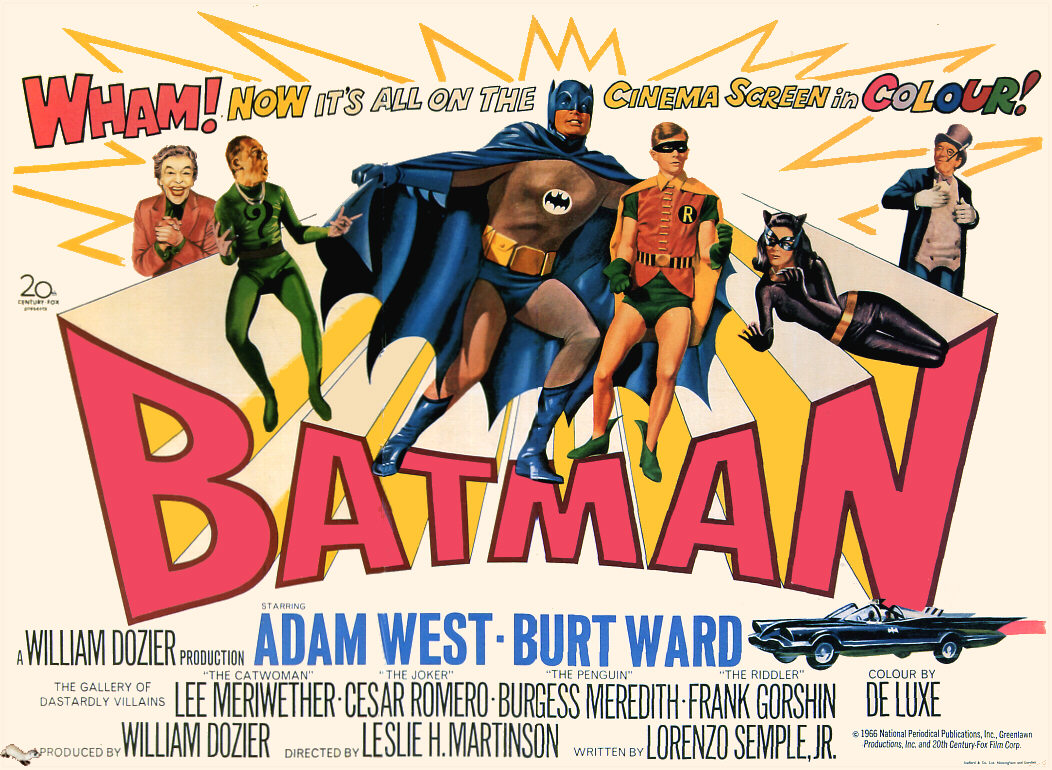 This is shown at the start of the movie:

“We wish to express our gratitude to the enemies of crime and crusaders against crime throughout the world for their inspirational example. To them and to lovers of adventure, lovers of pure escapism, lovers of the unadulterated entertainment, lovers of the ridiculous and bizarre… to the fun lovers everywhere this picture is respectfully dedicated. If we have overlooked any sizable group lovers, we apologize.” – The Producers

The original idea was that the movie should be released before the television series, so that the movie would promote the series thus gaining viewers. As you all know, this did not happen. Purely because ABC’s viewing figures in 1965 were terrible and they were desperate for something fresh and successful fast, which put the film onto the backburner. After the huge success of Batman’s first season production of the movie was pushed back up high on the agenda. Now the movie intended to gain overseas viewers to promote the TV series, as other than the United States the movie was shown before the TV series. Also the large movie budget allowed the production of new Bat-Vehicles: the Bat-Boat and Bat-Copter.

The Movie had an even great success in the UK as Batfans got to see Batman in colour for the first time, this was because colour televisions weren’t introduced in the UK until 1969. The only specifications Fox demanded from William Dozier were to use all four major villains and to have Lorenzo Semple Jr. (who wrote the majority of first season episodes) to write the script/story for the Movie. This in itself has made a huge impact on the whole Batman history as before 1966 Batman, the Riddler was not regarded as a “major” villain, appearing only a handful of times within the comic books. Also the Catwoman had been missing from the comics for several years as it was felt unacceptable to show women with “over-exaggerated” features appearing in roles such as criminals in American media. DC Comics actually had idea’s to turn Catwoman into a hero because of this. However, thankfully the 1966 Movie and series combined allowed for the return of Catwoman. Since the 1966 Movie both Catwoman and Riddler have appeared in the comics numerous times as well as the Batman Animated Series and the latest movies.

The estimated cost of the Movie is $1,400,000, according to Fox box office numbers the movie has achieved $3,900,000 worldwide. Considering Fox was low on money during this period, the budget was very generous showing that they had a lot of faith for Batman. At the time however, the film had achieved only $1,700,000 in North American box office sales, so almost breaking even. William Dozier in an 1968 interview with Associated Press said that “we were trying to sell something that was already free to the public at home”. Meaning the reason why in his opinion the movie did not sell as well as expected was that in the U.S people were contempt with the television series.

It was filmed with a 26 day shooting schedule. If you notice a lot of the storyline revolves around the Penguin, it’s his submarine, his dockyard hideout, his henchmen. The Penguin was the sort of leader within the gang of four criminals, which isn’t surprising as Burgess Meredith’s Penguin was the favourite guest villain amongst the script writers.

The movie premiered on 30th July 1966 at the Paramount Theatre in Austin, Texas. Check out my videos webpage where you can watch interviews from the ‘Texas Archives’ with the cast members during the premier. On 4th July 1971 the movie was first broadcasted on U.S television on ABC – the same network which the series was originally shown on. In 1985 it got its first release on home video on VHS & Betamax formats, then in 2001 we had a DVD release, with finally the latest format BluRay being released in 2008.