The ‘Count of Conundrums’, The Riddler, baffled Batman & Robin with his riddles. As Batman said in episode #11 ‘A Riddle A Day Keeps The Riddler Away’, that once the Riddler confessed to him that as soon as the riddles have stopped coming, his crime has finished. Maybe if he didn’t leave clues for our heroes he may have got away with most of his crimes, but who knows?! As the Riddler thrives on leaving them and likes the buzz when our heroes slip, as above all else the best thing about crime is out-witting the dynamic duo.

Frank was born in Pittsburgh (1933), from Slovenian descent. Frank’s first job as a teenager, was part-time work in cinema, where he would learn actors mannerisms which he would eventually take onto stages of night clubs as an impressionist. In 1953, he drafted into the U.S army and posted in Germany, where he served for just under two years as an entertainer, attached to ‘Special Services’. Whilst working in the army he was able to social network, where through friends was introduced to an Hollywood agent.

On returning to the U.S, he kept up his nightclub appearances which were proving to be ever increasingly popular. In 1956 he made his first credited appearance on television for ‘The Alfred Hitchcock Hour’. Between the 1950’s and 1980’s he would appear in many televisions series including; ‘The Detectives’, ‘Combat!’, ‘The Munsters’, ‘Star Trek’, ‘Charlies Angels’, ‘Wonder Woman’ and ‘Murder, She Wrote’.

As Bat-Fans we will always remember him for being the Riddler, which in actual fact became to be his most popular role, appearing in 9 episodes in the series and featuring in the 66 Batman Movie.

“When I was first approached to play the Riddler, I thought it was a joke. Then, I discovered the show had a good script and agreed to do the role, but only on a show-to-show basis. Now I am in love with the character.”

Franks Riddler would appear in the pilot for the Batman series, which has been accredited to being one of the most successful pilots, in terms of TV ratings, ever seen (see history webpage). He was nominated for an ‘Emmy Award’ for his role as the Riddler, being the only actor to be nominated for such an award in the series.

“The first overnight ratings were phenomenal, and we knew then that this was going to be something special…. I certainly enjoyed the success and the exposure but it has been a cross to bear. I was nominated for an Emmy for playing the Riddler in that first episode, I did not win however, I was just so thrilled to be nominated. But people identified me as being the Riddler for a long time. I had a tough time trying to be considered again as a straight actor.”

It’s not just 66 Bat-fans who should respect his appearance as Riddler, the whole Batman fandom should be. This is because, the character of the Riddler was only seen a handful of times in the comics before Franks portrayal. Now we all attribute the character to being one of Batman’s most popular adversaries.

“I developed the Riddler’s fiendish laugh at Hollywood parties. I listened to myself laugh and discovered that the funniest jokes brought out the high-pitched giggle I use on the show. With further study I came to realize that it wasn’t so much how I laughed as what I laughed at that created a sense of menace.” 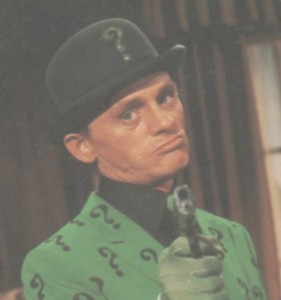 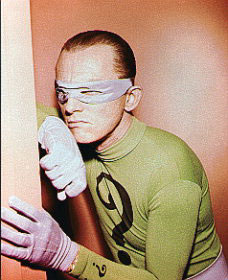 “While we were filming Batman I often got asked if I’d got it together with Catwoman. It was tough enough in my own tights, let alone hers! I had worked with Bill Gerringer on Naked City. He told me he had this project and asked me if I would consider the part. I absolutely loved the Batman comic books as a child – especially the Riddler. To suddenly be asked whether I wanted to bring him to life was just amazing. I didn’t have to audition or anything. The key had to be the laugh. Life was so much fun for him and I tried out so many laughs. But it had to be an honest laugh. I was really anxious to do this part it was just bizarre; the outfits, the tights everything!”

Frank played the part for eight episodes (four storylines) in the first season and for one standalone episode in the third season. John Astin took over and appeared as the Riddler for the one and only season two storyline. Frank had always said that he was not available at the times asked to film due to prior commitments. However, when researching into it there are many sources to suggest that Frank was asking for more money to appear as the Riddler, but William Dozier declined his request. In a memo between himself and Dozier from 1966, its stated that Frank had requested a raise from $3500 to $5000 per storyline appearance. I feel that if this disagreement was not to happen, we would have seen Frank a lot more – possibly being one of the most used villains. The Puzzler episodes early on in the second season were written for the Riddler, then subsequently changed when they couldn’t get Frank to appear, one can only assume they gave up and casted John Astin to appear as the Riddler near the end of season two. Thankfully, we got one last ‘hurrah’ and saw Frank reprise the role one last time in the final season.

Later in life, during the 1990’s he undertook in voice work – even returning to Batman for ‘The Batman’ animated series, voicing the character ‘Professor Hugo Strange’. He appeared in the 2003 ‘Return to the Batcave‘ TV movie/documentary.